FNM began their Sol Invictus tour in Japan and Australia, they returned to the USA for the first time since October 1997 in April 2015. After this they toured in Europe and the UK before returning to the USA and Canada for a second leg. The final gigs of the tour were in South America and on Sunday September 20th FNM performed at Luna Park, Buenos Aries in Argentina.

A bowling ball pendant and countless floral arrangements were all that adorned the stage to the nines. The five musicians, as well as the backdrop and hedging instruments, wore the colour of purity. If you are retailers that went unnoticed until the staff to use the same tone. The contrast came with the play of light, strolling among palettes, spotlight on the ball that turned the stadium into a nostalgic nightclub and, again, the blinding white at its highest power.

Not the first nor the last time that we emphasize the ability of Mike Patton to do what he pleases with his vocal cords. The leads of the most serious and grim at exorbitant screams, raps, whistles, shouts using megaphone and paste, in Spanish and English. It not for nothing is considered by many as the best vocalist today. Jump, run, squats and jumps again with the agility of an asshole and not a sign of weakness in the tones.

The versatility comes not only with Patton. Through these decades it has been known FNM distinguished by the multiplicity of styles and skilful interpreted with perfect sync. Surprising to more than one, was, after 17 years, a new entry to the study and Sol Invictus was born after long gestation. Without going any further, to  Matador  the show premièred in the Falklands in 2011. The presentation was inevitable and a pleasure for fans who are happy with the alternation between metal, grunge, symphonic rock and hardcore, skill peaked going from  The Gentle Art of Making Enemies  cover of the Commodores,  Easy .

With a perfect Spanish in Mexican accent, introduced towards the end, his teammates with his "argentinizados" names. Rodrigo Bottum on keyboards, the fucking Billy Gould on bass, the old pervert Michael Bordin on drums, Johnny Hudson on guitar. Earlier, the jester had entered the show wearing a hat Arab sheik that the third theme rolled her around.

The FNM was fired three times before leaving the stage and turn on the lights of the stadium after about an hour and a half with a deafening show the power of these great feature of San Francisco. This time, the farewell was more one soon . 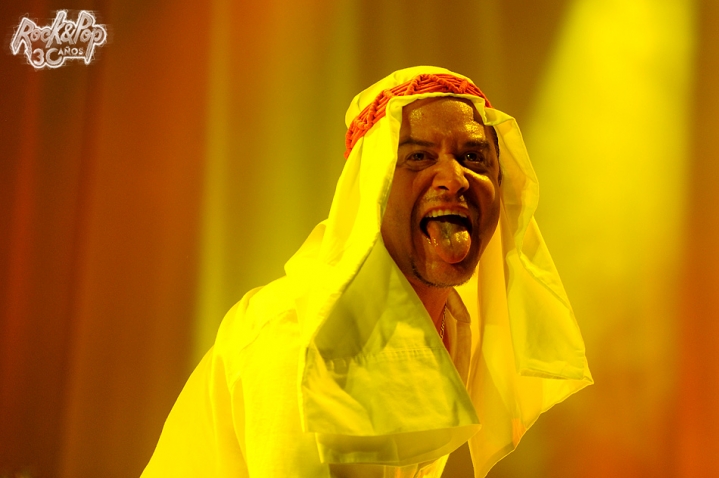 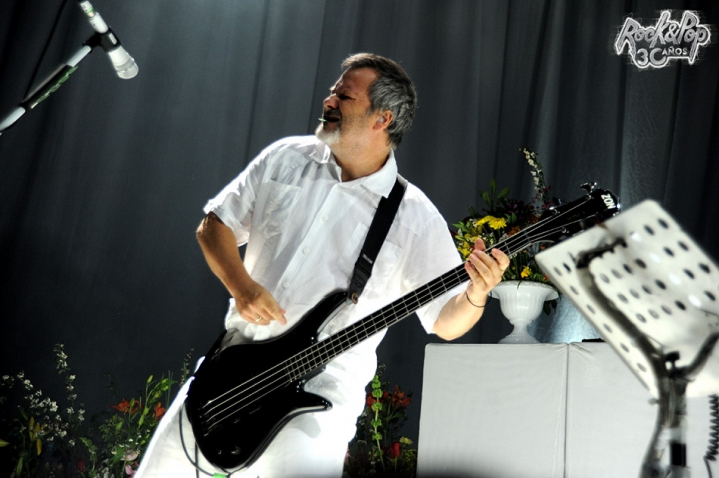 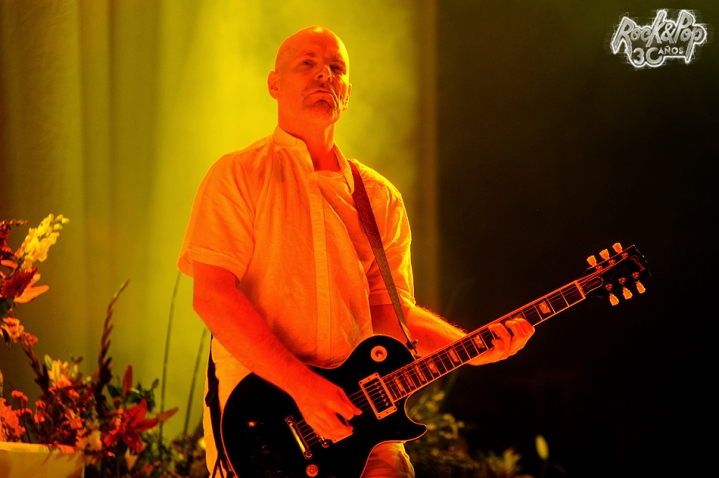 Patton, Bottum, bassist and frontman Billy Gould, drummer Mike Bordin, and guitarist Jon Hudson may be in their 50s, but upstairs they move like it's the first time they're rocking, proving they're one of the number one bands. one of the international rock scene of the moment.

Dressed in white, surrounded by flowers and with a white backdrop, they began to warm up the atmosphere with "Be Aggressive" and "Caffeine", by Angel Dust (1992), where Bordin's double bass drum began to set the rhythm of a show that, like the previous two in the country (2009 and 2011), foreshadowed an overwhelming night.

Bottum's piano, who with his histrionic movements and his impoverished but graceful Spanish got the most applause from the audience, kicked off "Everything's Ruined", where the vocalist began to show that he could switch from bass to treble in a jiffy with complete ease.

After 20 minutes of recital, when Faith No More had already clarified why it has been the head in several festivals, they threw all the meat on the grill with the melodic and acclaimed "Epic", where Patton, again, showed that it only needs to be complemented by a pedalboard that you operate from the stage.

"Epic" was followed by "Evidence", that mix of hip hop, heavy rock and new metal, in which the singer goes through all his register and vocal color and the rest of the band leaves samples of their enjoyment of covering so much from Black Sabbath as from Take That or Madonna.

So far, the only weak point had been sound, quite saturated in every way, without the lyrics being understood very well.

But with half an hour into the concert, too much for a sold-out international show, everything was set up so that "Black Friday" sounded perfectly and gave the entrance to a tour of greatest hits that began with the choir "Midlife Crisis" , followed by the deliciously dark "Last Cup of Sorrow."

"The Gentle Art of Making Enemies" and the cover (almost own) of the Commoders "Easy" made the public delirious, who was able to rest from so much jumping and poing with the premiere of "Separation Anxiety", song of "Sol Invictus" .

At this point, it seemed unlikely that less than an hour had passed a show with 12 songs without respite and a band that did not stop for a second and remained intact,

Thus, before reaching the encores, the classic "Ashes to Ashes" (with an exquisite disco soul version in the middle of the song) played between the two hits from the album that they came to present: "Matador" and "Superhero" .

To close the show, Patton mentioned the members of the band and, taking advantage of the limited Spanish of his bandmates, introduced Gould as "that bastard whore", Bordin as "the old pervert who plays drums" and him same as "Fixed Pinion".

The first batch of encores featured "Cone of Shame", "Digging the Grave" (with Bottum filming people from the side of the stage) and "Just a Man", with a tribute to pop singer Rick Astley with the chorus. from "Never Gonna Give You Up".

The end came in the second round of encores, with the classic "We Care a Lot" from the band's first album and with the bass slap leading the entire song, along with harmonized backing vocals from Gould, Bottum and Hudson. , the hard tacho of Bordin and the thousand and one voices of a masterful Mike Patton. 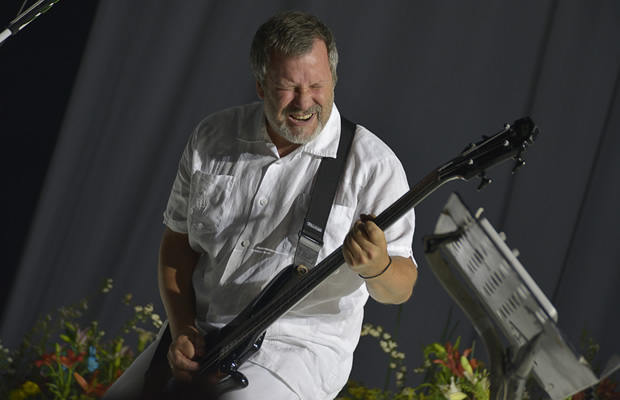 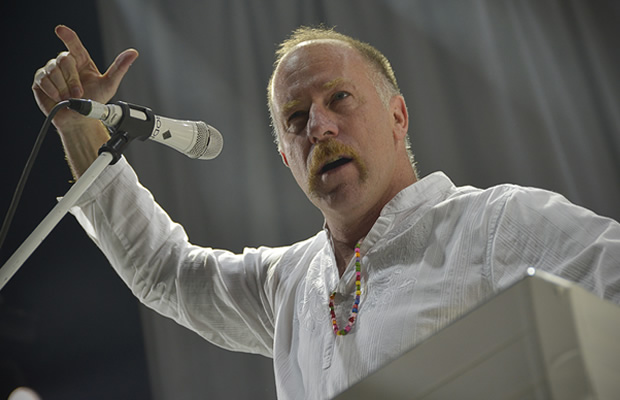 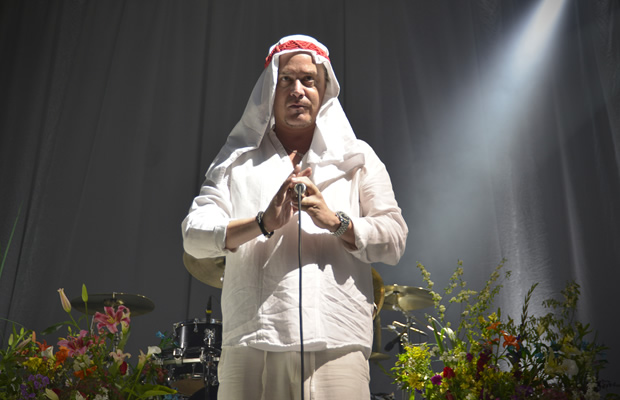 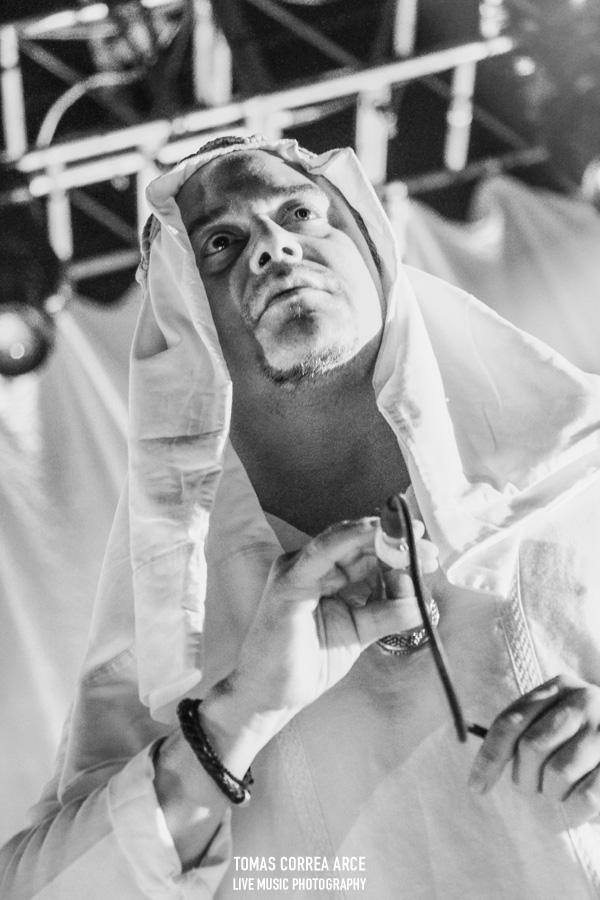 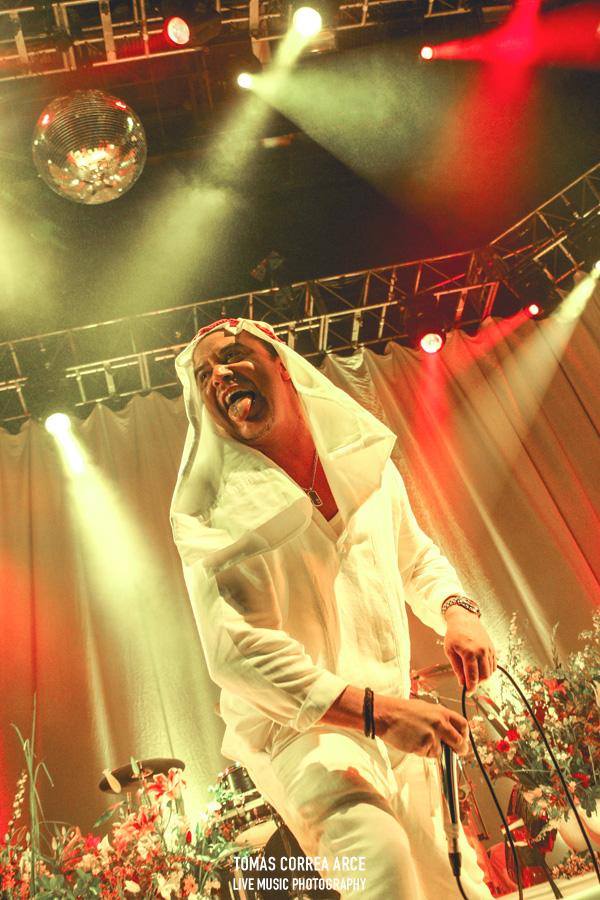 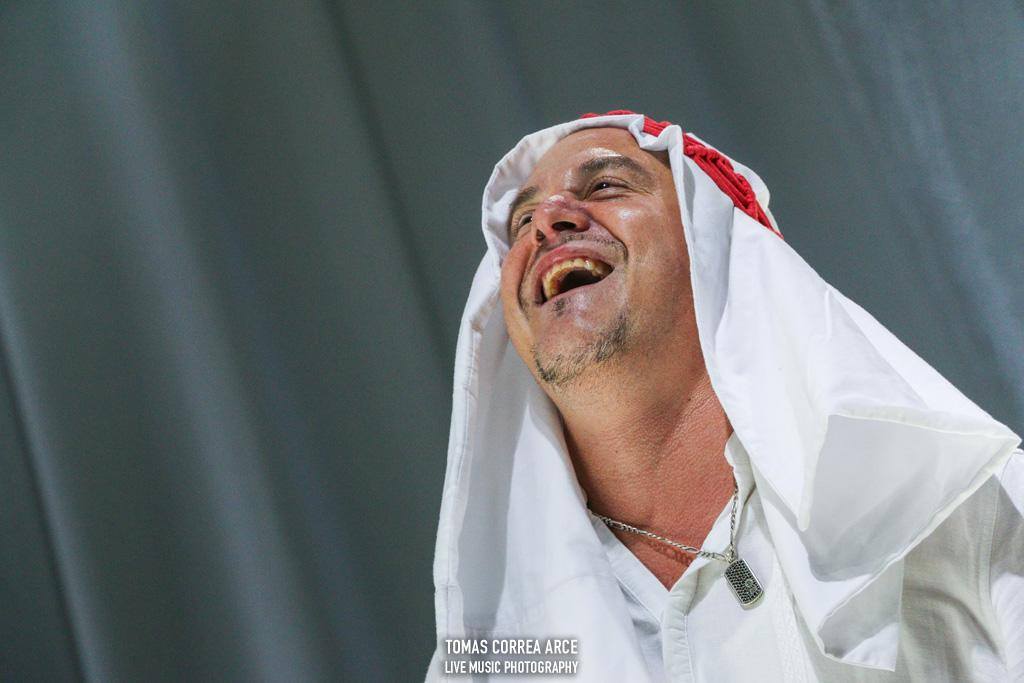 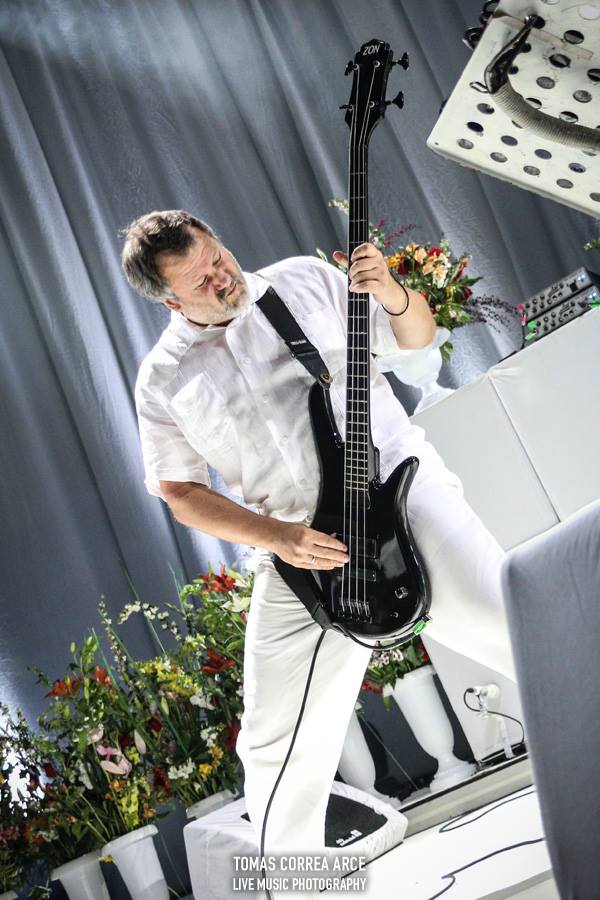 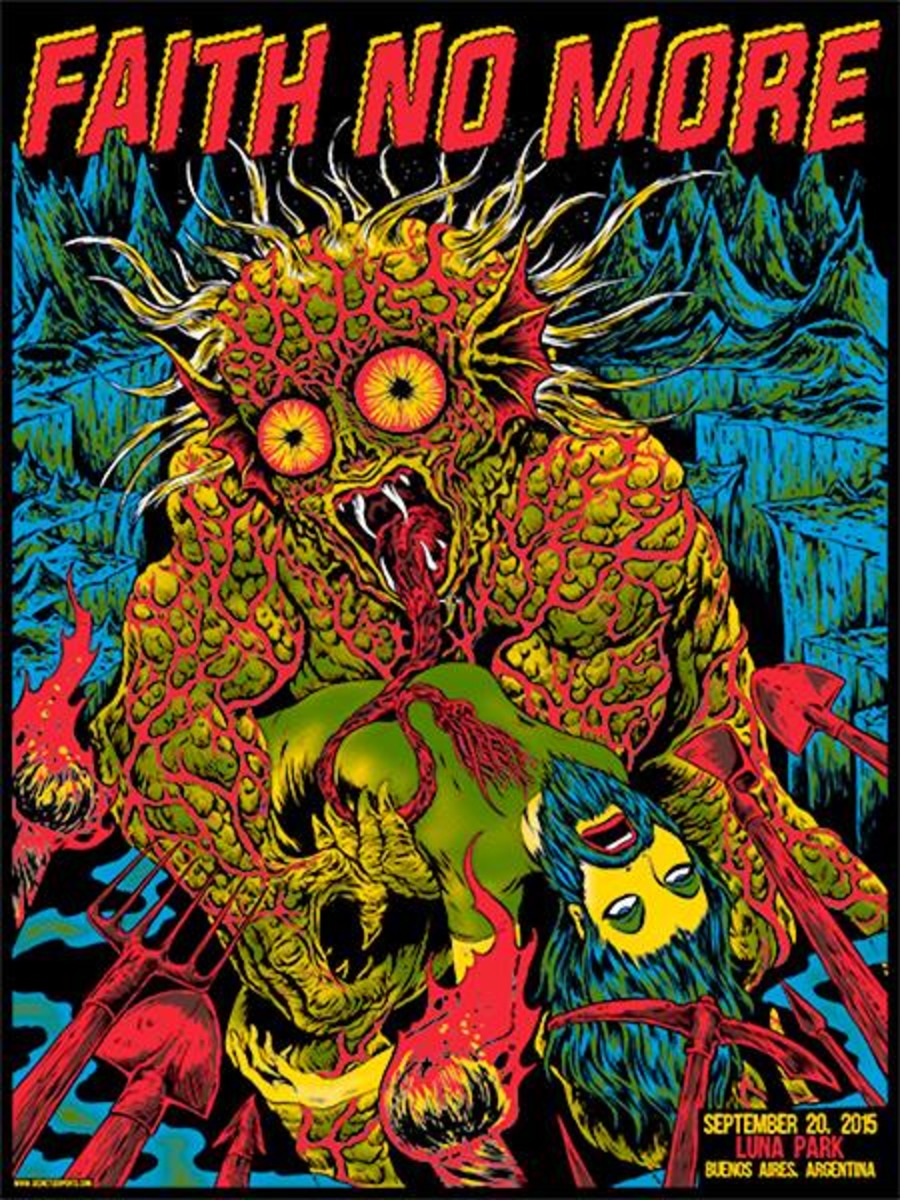 with Rick Astley, "Never Gonna Give You Up"