FNM began their Sol Invictus tour in Japan and Australia, they returned to the USA for the first time since October 1997 in April 2015. After this they toured in Europe and the UK before returning to the USA and Canada for a second leg. The final gigs of the tour were in South America and on Friday September 18th FNM performed at Royal Center, Bogota in Columbia.

Before trying to describe the accumulation of emotions and details that were part of the show that Faith No More offered in Bogotá, I consider it pertinent to remember some of the words with which "Rock Show Special" from BBC Radio described them: "If we ask you about some of the most influential bands of all time would have to be Black Sabbath, AC / DC, Led Zeppelin, Nirvana and Metallica. But there is another name that would be next to them. Probably the only group to combine metal, hip hop, punk, R&B, jazz, thrash and they became superstars in the process. His album "Angel Dust" was chosen by Kerrang magazine as the "most influential album of all time." They are Faith No More.

Given the necessary context to what a band like Faith No More means in rock history, let's go back to what the event was as such. The entrance of the attendees was orderly and smooth thanks to the good logistical work of the theater. "Naked in Coma" national band chosen to start this rock night, did a great job. In fact, the responsibility of opening the stage did not weigh on them at any time. His experimental rock was characterized by a good level of execution with post-hardcore and progressive passages where the good work of his drummer David Rincón showed off.

Before the highlight of the night, the stage was adorned with floral arrangements as the audience counted the minutes to enjoy Patton and company. With the perfect preamble, Faith No More burst onto the stage with a powerful “Motherfucker”, chanted in unison by the audience followed by an exquisite “Land of Sunshine”, where the band showed their excellent moment. Adrenaline soared with the powerful “Caffeine” that allowed Mike Patton to expose much of his vocal ability, continuing with “Everythings Ruined” and a glittering work by Billy Gould on bass, who, like good wines, seems to play better. over the years.

The presentation resembled a sonic delicacy with the brilliant interpretation of "Evidence" that provided the necessary calm before the outbreak of the classic "Epic", with which the attendees shook the foundations of the Royal Center theater. That moment was used by the band to seduce us with one of the most interesting pieces from their latest album, such as "Sunny Side Up" and the perennial "Midlife Crisis", igniting the joy of the audience to lead to the magnificent "Last Cup of Sorrow, where Roddy Bottum and Jon Hudson demonstrated their great technical ability, on keyboard and guitar respectively.

The decibels exploded with the spirited "The Gentle Art of Making Enemies" in which more than one strained his throat trying to emulate Patton's glittering vocal performance. After the barrage of power, the band presented an exquisite interpretation of “Easy” demonstrating its great versatility on stage. At that time of the night came two songs from the album "Sol Invictus", released this year. The first of them was "Separation Anxiety" followed by "Matador" which despite being too new songs, were very well received by the audience.

The show continued with the great classic "Ashes to ashes" from the 1997 "Album of the Year" with a Patton who stole attention for his great charisma and "Superhero" who culminated in an excellent way the first part of this presentation.

After a few minutes of pause and the incessant shouting of “Faith No More” from the audience, the group returned to the stage to perform an “encore” or closing composed of the songs “Sol Invictus”, the classic “We care a lot "And a memorable" Just a man ", where Mike Patton launched himself into the audience in an epic" stage diving "that made everyone present hallucinate.

About this unforgettable concert I have a couple of images and a feeling that is unable to get out of my mind. I have never seen such a happy and smiling audience hugging each other after a rock show, nor have I seen such dedication from a band, in a country where it is just making its debut. On the other hand, I have the gratitude of having witnessed one of the most important groups in the world in a show that I never expected to see in Colombia.

Praising Faith No More is simply raining in the wet. His professionalism on stage is enviable, the technical ability of his musicians is impressive, and Mike Patton's charisma and delivery are simply spectacular. He is by far the best "frontman" who has ever walked these lands.

This presentation stands out as one of the best rock concerts that Bogotá has received this year and is surely part of the best shows that the capital's public has enjoyed in this decade.

I already miss the moment to see them again, if one day they decide to return to our country.

He gestures, sticks his tongue out, moves it with lascivious speed, twists, shrinks, jumps, changes his voice at will, points at the audience, taunts him if he feels like it, throws himself at them as if he were in some bar in the 90s. The flashing lights reinforce that theatrical aspect of the leader of the ceremony. Not even the crowd overshadows it. Mike Patton is the undisputed protagonist, the beast without chains, a strident priest with an energy that surpasses him, as if he wants to boil and explode against the crowd that does not stop cheering him. On the way to the Royal Center, the streets were bubbling with love and friendship, very red. The city's platforms, on Seventh, 13, 11, Caracas, all were packed emulating the traffic. A wild route. We arrived at 8:30 pm. Inside we were greeted by the first good surprise of the night: Nudes in Coma. The band chosen by Faith No More, or by some member of the band, or by his advisor or by whoever, seized the opportunity. They played effortlessly, without poses, relaxed, almost in a trance between loud sounds and strident voices, sometimes in Spanish, sometimes in that unmistakable Cali English that always accentuates where it sounds best, and not necessarily where it corresponds. Féinomor! Almost none of the people I told that I was going to the concert knew the Californian band. Only my girlfriend recognized it when I put "Easy" on YouTube. Rest, nothing. I had stopped hearing them myself for almost 20 years. I barely remembered that they had separated. But the memory of the power of his music remains intact. FNM was one of those groups that needed time to reach you deeper and deeper, time to like you more and more. It was music to listen to calmly, with interest. And in the 1990s, on the verge of the end of time, most of us felt quite lonely at one time or another and had that time. This September 18 I added FNM to my list of groups that do not have bad songs, not even regular ones. Which is more difficult if you are FNM. That is, Pink Floyd is also on that list, and The Doors, like someone else's, may be Foo Fighters or Coldplay or whatever. But all of them have it easier. Pink Floyd sounds like Pink Floyd and voila, Foo Fighters a Foo Fighters, The Doors a The Doors, etcetera. But FNM never sounds like something like that. I remembered that tonight. That, for me, is the power of his music. For those who do not know, FNM is not one of those bands from decades ago that simply returned to the stage just to bill, or as my friend Carlos says, because they need simple. It is a group that sounds better than ever, which shows the years in the gray hair and the speed, but which would be a shame simply to see disappear. 18 years ago they did. And for me it was good. Now, I hope they never do it again. The stage of the concert could only be predicted by those who already knew something about the tour. Hundreds of flowers, among which I recognized sunflowers and a great variety of heliconias, provided the only colors on an immaculate white. The aesthetic proposal, with all the members of the band also dressed from head to toe in white, was sober. Even the zenith light play was limited to a balanced variation of purple, blue, yellow, and red, without much pretence. In action a little earlier than scheduled, bassist Billy Gould shone with his flair. Style. That is the exact word. His movements, a chore between jazz and hardcore, made me think that there is something like the "sabrorusa of rock and roll." My friend Gustavo said that for him, he is the best bass player in the world. Mike Bordin, a bit hidden by the drums, made me understand that not everyone plays with Ozzy Osbourne. I barely noticed the movement of John Hudson's fingers on his guitar. The guy was some kind of a living statue on stage. Roddy Bottum, with several colourful necklaces dancing on his chest, displayed the mastery of the one who is already above good and evil. And what about Patton ... Let's not mess it up with words about Patton. All with superhuman energy, At the end of the night, the caps no longer cost 15,000 as before the concert. Now they were worth up to half. The same the t-shirts. Curiously, the album that the band had just promoted live with such effectiveness was not achieved. Back in the silence of my apartment, shortly before midnight, the city had already settled down. Outside the Royal Center, satisfaction was widespread. Almost 20 years had just passed and everything seemed to have improved.

This was the Faith No More concert in Bogotá 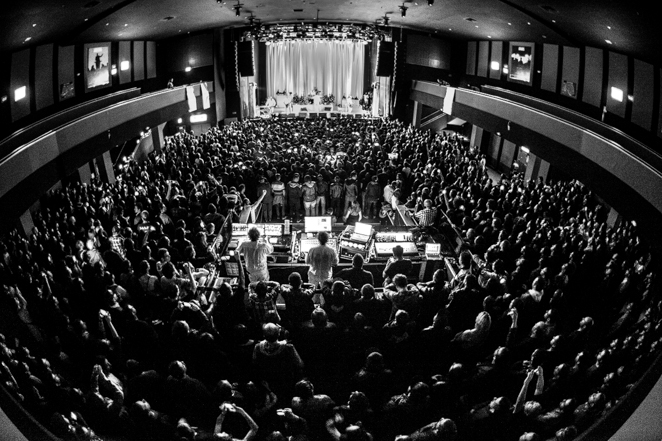 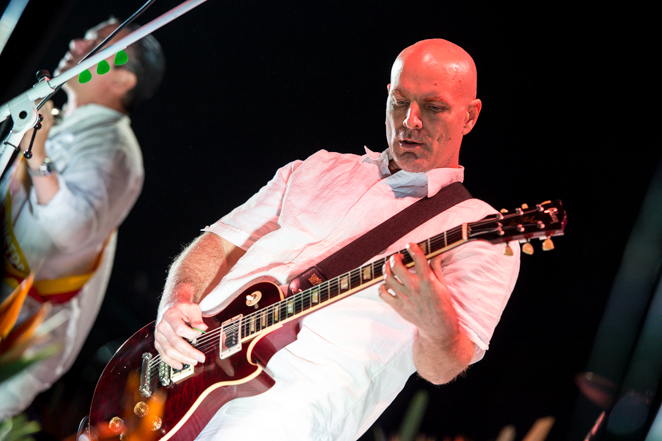 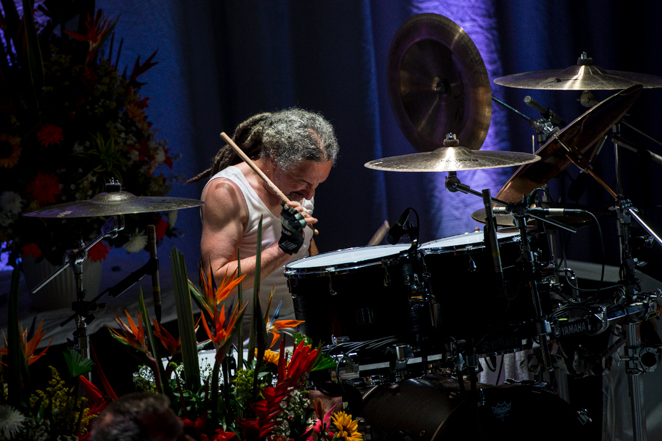 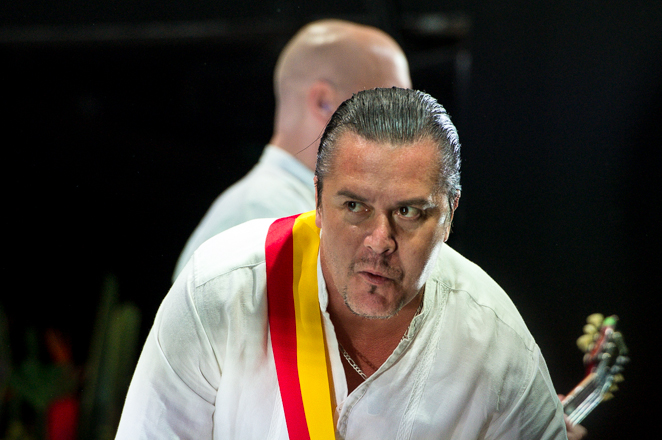 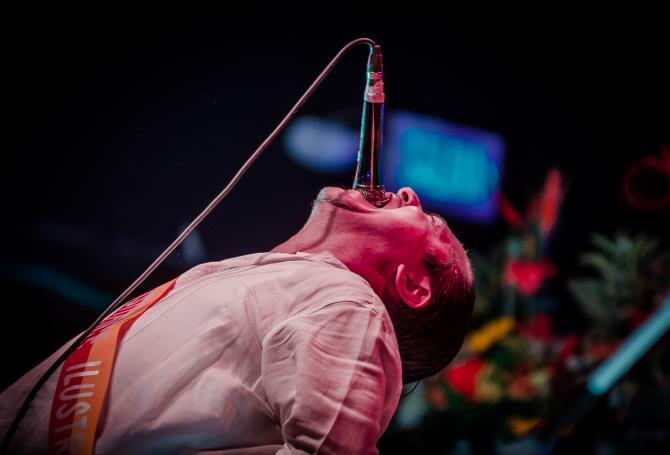 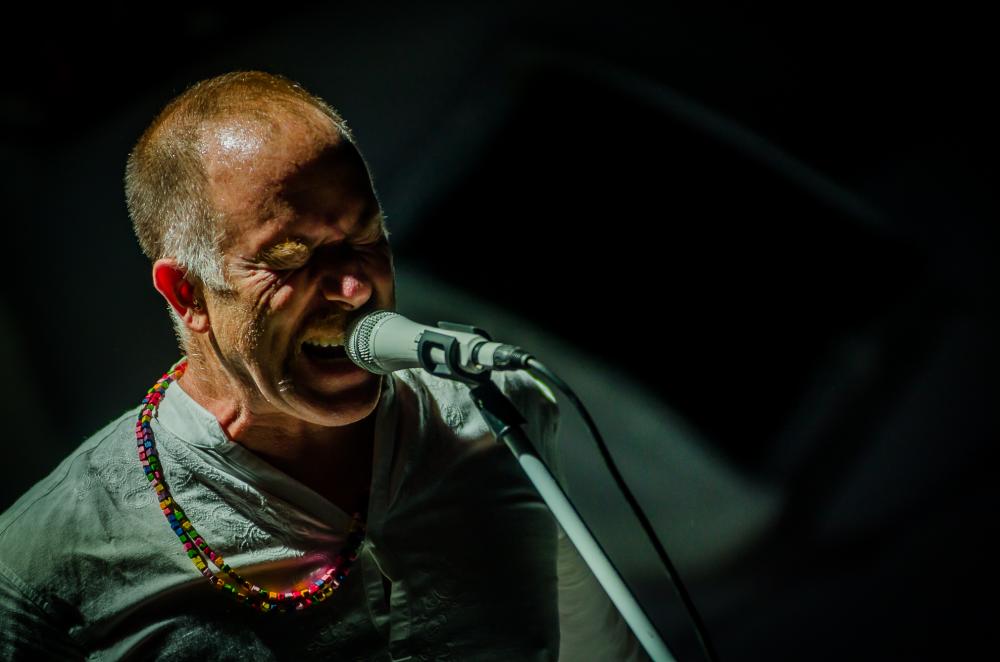 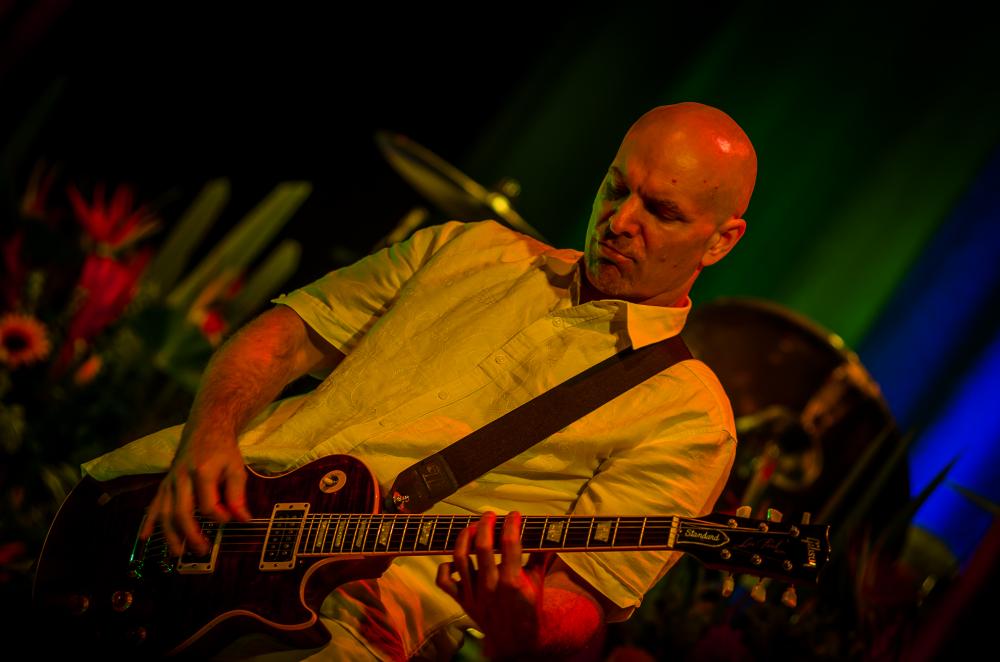